The plans He has for us often look different than the ones we’d imagined or think we deserve. 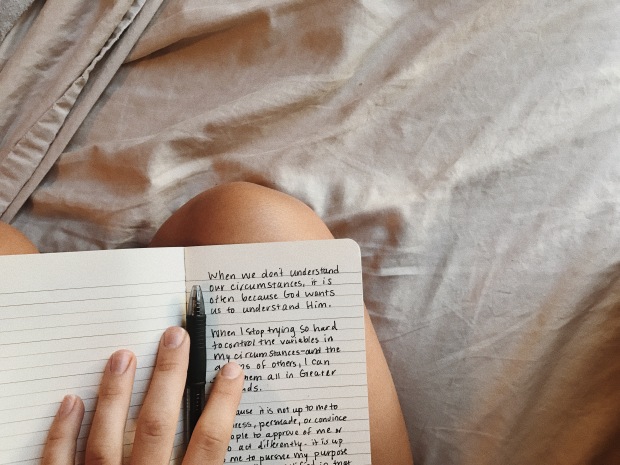 When we don’t understand our circumstances, it is often because God wants us to understand Him.

It is often because sometime-either sooner or later-He is going to replace something we wanted to hold onto so tightly with something so much greater.

His timing is not random and He isn’t waiting just to make you miserable. He’s waiting so that in the meantime, when nothing makes sense, you can find Him.

& understanding him might mean spending time alone with Him, but it also might mean simply living in awareness that each day is a chance to wait expectantly for what He is doing. It doesn’t have to be complicated like we make it.

Our lives were never meant to be what we expect, they are meant to be so much more. But we have to release our own expectations and exchange them for His. We cannot hold onto what we want and experience abundant life because the life that He is giving us is often different than what we’re holding onto. We are settling for what the world tells us we should want and He is holding out so much more.

So no, His ideas might not match all of yours. They may look painful at first and you may be confused for a while, but I can assure you they are better.

No part of your circumstances are accidental or a mistake. When you stop trying so hard to control the variables in your circumstances-the intentions, actions, and opinions of other people-you can hand them over.

One of the greatest gifts you can give yourself and this world is releasing your attempt of control over your circumstances and the responses of people in your life. Pursue who you are called to be, and leave the rest up to One who holds the world.

When you do this, you’ll realize that “our ideas & His” converge into one:

because they are better–every time.